Permits every account to hold an unlimited number of token associations. Retains the current pricing for each token association. Deprecates the return of token associations from the getAccountInfo, getContractInfo, and getAccountBalance queries and modifies the specification of the returned results during the deprecation period. Changes the criteria for the cryptoDelete transaction to require all token balances to be zero before successfully marking the account as deleted.

The current Services API permits the user to have at most 1,000 token associations per account. This limitation was imposed because the current implementation becomes prohibitively expensive with large numbers of associations. In addition, processing and returning the getAccountBalance query becomes more expensive linearly as the number of associations increases. A user can work around this limitation by creating multiple accounts, each of which is also limited to 1,000 token associations, but several use cases become difficult or awkward to support in this way.

I have an account with 1,000 tokens already associated with it. After the update to the release with the limit removed, I can add another token association, putting my account at 1,001 associations.

2. A User can configure auto association to more than 1,000

3. An NFT Creator can mint thousands of NFTs in a single collection

I love creating NFTs. As a primary creator of an NFT collection, I am able to mint thousands of NFT serials in a single collection.

4. A secondary NFT Marketplace dApp can have thousands of collections

As a secondary NFT marketplace dApp, I should be able to create thousands of collections (created by multiple primary creators of the collections), such that each collection can hold thousands of NFTs.

5. A User can get the full set of tokens and balances from the mirror node

I have a large collection of thousands of tokens. I can query a mirror node to get the full set of tokens and their current balances.

6. A User can delete an account with associated tokens if there are no balances

I have thousands of token associations. Several thousand of these were manually associated and several thousand were auto-associated. But none of them have any balance. I can delete my account.

7. A User’s account has expired while they have associated tokens with balances

I have an account with tens of thousands of associated tokens and some of those tokens have balances. But I no longer want this account, and it has no HBAR in it, and I let it expire. The system will clean this up for me.

Separate from accounts is the tokenAssociations map in the merkle tree. This maps from EntityNumPair (the pair of account ID and token ID) to MerkleTokenRelStatus. It is this MerkleTokenRelStatus that contains information for the association, such as the balance or whether it was an automaticAssociation.

An unbounded array of associations per account is undesirable with this design because the amount of time it takes to hash the MerkleAccountTokens leaf becomes excessive as the number of associations grows, and any state proof involving that leaf requires passing the entire array along, making the state proof very large. It also means the getAccountBalance query becomes arbitrarily expensive since it requires reading a MerkleTokenRelStatus from tokenAssociations for each token ID in the account’s MerkleAccountTokens array!

Thus, we set the boostrap property tokens.maxPerAccount to 1000 in testnet and mainnet to limit the maximum number of associations per account.

HederaTokenStore.associate is called when auto-associating an account with a token during a token transfer. In this method we verify that the new auto association will not increase the number of tokens for this account past the limit defined by tokens.maxPerAccount.

Account.associateWith is called when manually associating with a TokenAssociate transaction. In this method we also verify that the account does not get associated with more tokens than specified by tokens.maxPerAccount.

We also verify that the value for maxAutomaticAssociations on the account (as described by HIP-23) does not exceed tokens.maxPerAccount.

Thus, to follow the chain, you start at the first MerkleTokenRelStatus for the account, and follow the next links one after another. For each, you create a temporary EntityNumPair with the account ID and the token ID contained in next to look up the next entry in the list. The prev link exists to allow us to efficiently delete an item from the list, as with any standard doubly-linked-list implementation.

The MerkleAccountState will receive a new fields, integer numPositiveBalances, another integer numAssociations, and one long, headTokenId. The linked list always pushes the most recent addition to the head of the list, referred to by headTokenId. Walking the list from first to last would list the tokens in order from most recently added to the least recently added to the list (however, due to migration, the position in the list may not be ordered by when the token was associated). 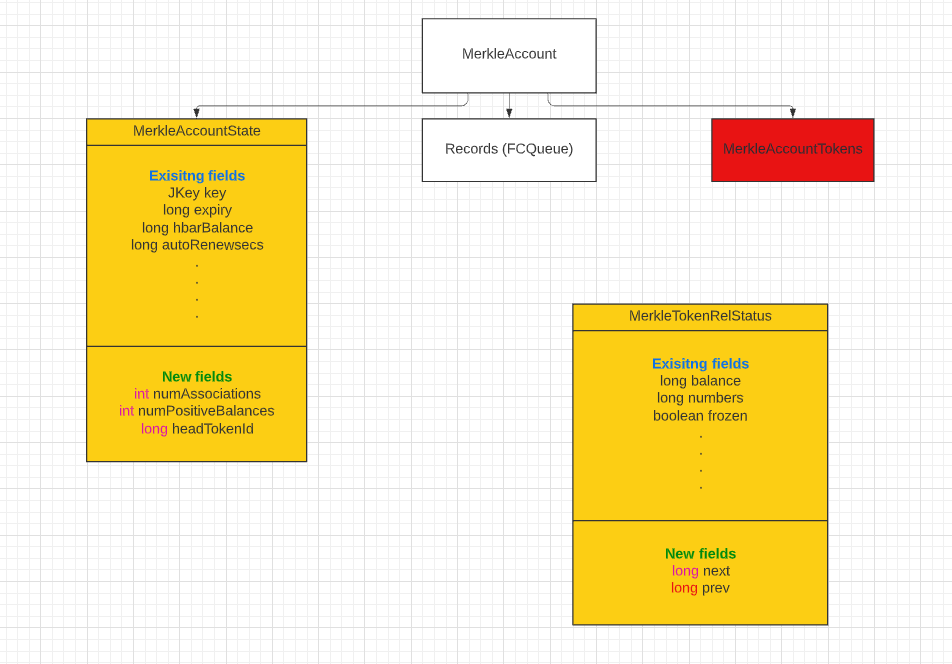 TODO Image needs to be updated to include new / proper names

The headTokenId is updated whenever a new token associates with the account (either explicitly or through auto associations), or when the first association is removed, or during migration.

The numPositiveBalances field is updated whenever one of the balances of the token list for the account is changed from being a zero balance to a non-zero balance or vice-versa. This can happen:

When a user tries to delete an account, if numPositiveBalances is greater than 0, then we will not allow the account to be deleted. The user must first transfer balances out for all tokens.

The numAssociations field is needed so we can efficiently compute a renewal price.

During migration, nodes will load an older state containing MerkleAccountTokens. We will continue to host this leaf until migration completes, after which we will remove it. During migration, we will iterate over all accounts. For each account, we will iterate over each token ID in MerkleAccountTokens. For each token ID, we will construct an EntityNumPair from the account ID and token ID and look up the associated MerkleTokenRelStatus. The first token ID we handle will become the end of the list. So for each subsequent token ID we handle, it will become the prev of the previous MerkleTokenRelStatus. The very last token ID will be the headTokenId for the account.

Token disassociation requires maintenance of the linked list. Management of alreadyUsedAutomaticAssociations remains as it does today and is not altered by this HIP.

This HIP formally deprecates the token association lists returned by these three queries. Within 6 months this information will no longer be retrieved from consensus nodes. Instead, clients must query mirror nodes for this information.

Please follow this issue to track progress on the Mirror Node replacement API.

The challenge with these queries is that they require numerous uncharged map look-ups to find and retrieve the token information, and when token limits are removed, these queries may take an arbitrary amount of time to complete. For this reason, and to maintain compatibility during the deprecation period, we will continue to return at most 1000 (tokens.maxRelsPerInfoQuery) results. The order of these results is explicitly not specified. Thus, if you have 1001 token associations, we will only return 1,000 of them, and are free to return any 1,000. Instead, clients are strongly encouraged to query this information from mirror nodes.

When transferring any token units (Fungible or Non-Fungible) we have to update the numPositiveBalances on each of those accounts respectively.

On every tryAdjustment and updateLedgers calls when adjusting token units:

When a TokenWipe operation is performed on an account, we have to update the numPositiveBalances accordingly. When wiping either Fungible token units or NFT units on an account:

When a TokenBurn operation is performed, we burn the asked amount off the treasury account and update the total supply. Update the numPositiveBalances of the treasury if the burn left the treasury with zero balance on that token. When burning either Fungible token units or NFT units of a token:

When a TokenMint operation is performed, we mint the asked amount of token units, by adding to the treasury account’s token balance, and we update the total supply of that token. We increment the numPositiveBalances of the treasury if the original balance for treasury on that token is 0. When minting either Fungible token units or NFT units of a token:

Currently, we return TRANSACTION_REQUIRES_ZERO_TOKEN_BALANCES when a cryptoDelete transaction is submitted on an account with non-zero balances on the tokens [ not deleted] that it is associated with.

Balance exporter would need all the token associations without the limitation enforced by tokens.maxPerAccount.

AutoRenew fee calculations require the numAssociations on the renewing account.

For the same reasons as the accounts REST API, the /api/v1/balances API will limit the nested list of token balances to at most 50 token balances per account. Users should use the new Token Relationships REST API to retrieve more tokens than the limits provide.

A new /api/v1/accounts/{id}/tokens REST API will be added to show the tokens associated with a specific account ID.

It will support the following query parameters:

There are two functional changes required by this move to unlimited token associations.

Second, accounts can no longer deleted via a CryptoDelete while holding units of any token type, even if that token type is deleted. All balances must be cleared before deletion.

How to Teach This

MapValueLinkedList Increase token association limit HIP - 367 : Remove limit on the number of tokens that can be associated to an account Services-PR

This document is licensed under the Apache License, Version 2.0 – see LICENSE or (https://www.apache.org/licenses/LICENSE-2.0)

Please cite this document as: